ENGIE North America is on a mission to shape a sustainable future built on clean, affordable, resilient energy and the infrastructure that supports it, according to its website.

The rebate check, more than four times larger than originally anticipated based on the city’s energy program across sites, was awarded for the city’s implementation of an energy upgrade focused on enhancing facility performance, building resiliency and improving reliability of existing services through implementing sustainability measures, according to a press release from the city.

• Through a combination of solar, energy efficiency and LED lighting upgrades, the city has installed 350 kW of solar power and has upgraded interior and exterior lighting at public facilities to LED technology.
• The solar panels have been installed on top of shade canopies at city parking lots as well as in a ground-mounted array.
• Streetlights citywide have been upgraded to LED lighting to save money and improve public safety.
• New high-efficiency sports field lighting has also been installed at Heritage Park and Lambrecht Sports Complex. In addition to this, Heritage Park has been reconfigured to better accommodate the city’s soccer programs.

“This project continues to provide an ongoing opportunity to walk the walk on fiscal stewardship for our constituents, while embracing the chance to implement more sustainable solutions,” Mayor Lori Wilson said in a press release. “With more than $12 million of operational savings to our city coming through our sustainable energy program, our community is a leader in our region and that’s a really great feat. I’m excited to promote our city’s new profile around this commitment to sustainability.”

“We had been spending almost a half-million dollars a year on electrical costs previously,” City Manager Greg Folsom said in the press release. “Not only is that expense being significantly reduced, but the savings are paying for the project itself.”

“Suisun City has been a truly dedicated, innovative energy partner with our local ENGIE team, and it’s wonderful to celebrate how the broader community will realize the tangible fiscal and environmental benefits of the city’s stewardship for years to come,” she said in the press release. “The City Council and staff have shown leadership in forging the way toward the regional economy’s zero-carbon transition, and we feel honored to partner with the city on its sustainability vision.”

The sustainable energy and LED lighting project are reducing the city’s electricity spending by 60% and saving an estimated $12 million in avoided energy costs over the life of the project, the city reports.

The technology work, through integrated educational tie-ins as part of the program, is also benefiting Suisun City’s youth by aligning with summer camp and after-school learning programs tied to the project’s scientific principles related to energy conservation and solar generation, the city reports.

The project construction and implementation process should be completed by the end of the year, with ENGIE having worked side-by-side with Suisun City’s Public Works Department for the past two years.

Article in the Daily Republic 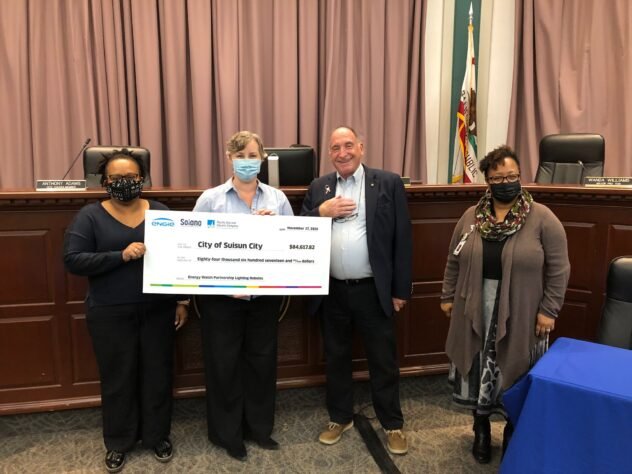