In February, the monthly unemployment rate in Solano County dropped from 8.6 to 8.1 percent. The rate also dropped in every city. As in previous months, the labor force has been fluctuating similarly to jobs, adding to the volatility of the unemployment rate number. During the last month the labor force increased by 2,300 after seeing a drop of 1,600 in January. The current labor force number is 3,500 lower than March of 2020. During February employment increased by 3,200 jobs. Note: employment represents Solano residents working both in and outside of Solano County. 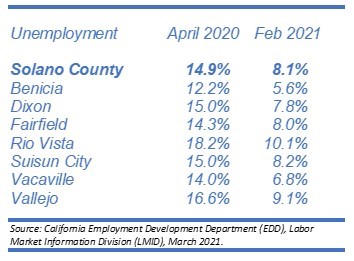 February figures of non-farm jobs located within the County showed significant improvement in both the Leisure & Hospitality and Professional & Business Service Sectors. This could be a result of the loosening of the most strict “stay at home” regulations in the State resulting in hiring of primarily Food Service & Accomodations Sector employees, as well as the arrival of tax season when tax preparation firms hire staff. 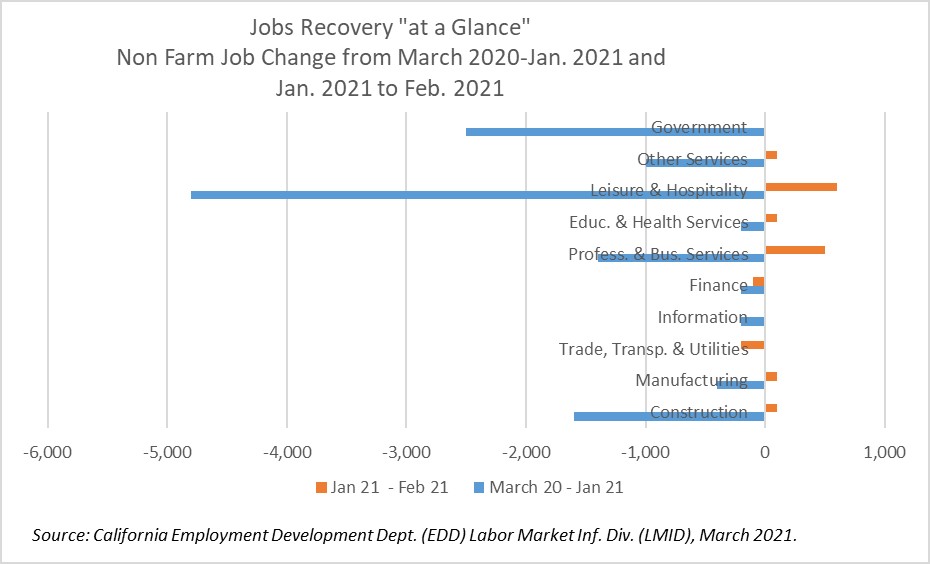 Manufacturing and Construction saw moderate gains of 100 jobs each, and the Trade, Transportation & Utilities Sector continued to reflect the laying off of seasonal retail workers with a drop of 200 jobs. Education & Health Services continued its steady gains, nearly hitting its employment level at the start of the pandemic.

These sector number are reflected in the total overall Non-Farm Jobs level in Solano County shown below.

While numbers increased during the month, most gains were cyclical in nature and not indicative of a larger increase in activity toward “normalcy”.

The recent lowering of Covid-19 safety regulations to the “Red Tier” allowing limited indoor commercial activities will likely continue to stimulate hiring in March and April. As mentioned in the previous newsletter, as the weather becomes more predictable, the Construction Sector typically increases hiring through the summer months.

Most importantly, with continued protective measures and vaccinations reaching greater segments of the population, we hope to see the avoidance of another surge and resulting tightening of health regulations occurring in other countries.